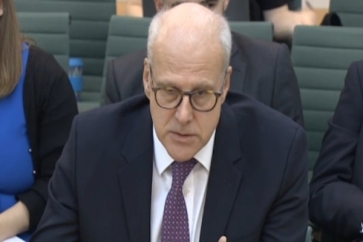 Charles Randell appearing before a Treasury Committee in 2019

The FCA is hunting for a new chairman to replace Charles Randell who will step down in the Spring, a year earlier than planned.

Mr Randell tendered his resignation to Chancellor Rishi Sunak and will quit as chair of the Financial Conduct Authority (FCA) and its sister Payment Systems Regulator (PSR) in about six months.

His contract was for a 5 year term but he has decided to step down a year earlier than planned.

The FCA said today that under his leadership the FCA has become a, "more proactive, data-led and forward-looking regulator."

However, Mr Randell has also had to deal with a number of regulatory challenges and criticisms and the FCA had to apologise after its handling of the £236m London Capital & Finance mini-bond fiasco was widely criticised.

The watchdog said Mr Randell had helped steer the regulator through the Brexit period with "minimal disruption." It said he had also supported consumers and businesses through the pandemic and is playing a key role in ensuring financial markets support the transition to a low-carbon economy.

The PSR has tried to tackle payment scams and has proposed a strategy designed to make sure payment systems work well for the long-term.

Mr Randell became chair of the FCA and PSR Boards in April 2018 with the appointments for a five year term. He has not announced that he will be moving to any other position. He was a partner at law firm Slaughter and May from 1989 to 2013, specialising in corporate finance law. He also worked on financial stability and bank restructuring assignments during the global financial crisis.

He was a member of the Bank of England’s Prudential Regulation Committee from April 2013 to March 2018 and a non-executive director and chair of the Audit and Risk Committee at the Department for Business, Energy and Industrial Strategy between 2016 and 2018.

Chancellor Rishi Sunak, said: “I want to thank Charles Randell for his work as chairman of both the Financial Conduct Authority and the Payment Systems Regulator during this important period.

“Both organisations undertake a vital role in ensuring that the UK financial markets work well, protecting the interests of consumers, promoting effective competition, and enhancing the integrity of the UK financial system. Charles has led both boards during the UK’s transition to our new position outside the EU, through the vital economic response to the Covid-19 pandemic and supporting the important transition following Nikhil Rathi’s arrival as new CEO of the FCA.”

Mr Randell said: “As the FCA prepares to implement its new wholesale, retail and data strategies under an established new executive, now is the right time for a new chair to carry on the close and continuous oversight of our transformation.

“During the pandemic, the FCA stood up for consumers and businesses, while the markets we oversee proved resilient, laying the foundations for record capital raising to support the recovery.

“The PSR has been working to ensure payment systems – the lifeblood of the economy – work well for all. Being chair of the FCA and PSR has been a great privilege.

More in this category: « HL client numbers move closer to 1.7m PFS board criticises parent CII as review begins »
back to top