Register for Financial Planning Today website for FREE to view more stories and get our daily newsletters. Click on 2 stories to see Registration pop up.
Wednesday, 13 April 2022 08:37 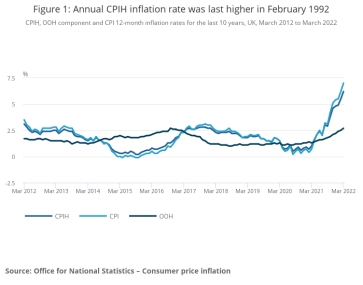 With further large increases in gas and electricity prices imminent many experts believe inflationary pressures will grow. Some have forecast a rate of 9% by the summer.

Reaction to the rise from experts was one of concern, with uncertainty about the long term direction of inflationary pressures.

Colin Dyer, client director at abrdn said: “This is now the sixth consecutive month of rising inflation, and the data tells a story of what millions are currently living – steeper bills on everything from petrol to food and fuel, and less left over at the end of each month to put towards their future.

“Current conditions will be particularly hard for those relying on cash savings, which are at a real risk of losing value in ‘real terms’ as inflation rises. To put this into perspective, £10,000 of savings in cash put away five years ago could now buy £800 less today – value that has just been wiped away by inflation’s attrition.

Paul Craig, portfolio manager at Quilter Investors, said: “Last month’s Spring Statement did little to quell the fears of those already feeling the squeeze financially, and the introduction of the new energy price cap and the national insurance increase has further increased the pressure. With wages failing to keep up and pensions not rising by a similar amount, things are going to get tough for a lot of consumers.

“Alongside the Bank of England’s most recent interest rate hike came the prediction that inflation would hit 8% later this spring. The Bank has underestimated the extent of inflation in previous forecasts and given this month’s increase, there could be even worse to come than previously feared. The Bank of England is looking more and more as if it is on the back foot in this fight against inflation.”

Adrian Lowery, personal finance expert at investing platform Bestinvest, said: “It’s yet another overshoot compared to expectations, although small in percentage terms as the headline rate of inflation gets higher. (Consumer prices across the economy are moving so quickly that analysts can be forgiven a few percentage points.)

“Nevertheless, if inflation readings continue to overshoot expectations, the pressure will only grow on the Bank of England to give more consideration to the medium-term path of inflation, over the possible drags on the real economy caused by higher rates.

“The danger is that as inflation expectations rise, so do wage demands and bargaining power, and that could entrench what is hoped to be a short-to-medium term spike in inflation into a medium-to-long term problem. While the monetary policy committee has the flexibility to bring inflation gradually back down to target in a year or two’s time – the central projection for 2% was forecast to be met the end of 2023 in the MPC’s February report - it’s questionable how such projections can be viewed with any confidence given the febrile economic conditions.”

Sarah Pennells, consumer finance specialist at Royal London, said: “Today’s inflation figures don’t take into account the rise in the energy price cap, which took effect at the start of April, suggesting tougher times lie ahead. Even so, the fact that the cost of living is rising by 7% a year is causing real anxiety among many UK adults. The extra squeeze on household budgets – whether that’s higher prices in the shops or at the petrol pumps – not to mention the National Insurance rise, is forcing many to question just how they make ends meet.”

Dan Boardman-Weston, CEO & CIO at BRI Wealth Management, said: “The figures will add further pressure to the Bank of England to accelerate the pace of interest rate increases, even though the growth outlook has deteriorated in the past few months. The war in Ukraine has extended the runway in terms of inflation staying high but a large part of the inflation continues to look transitory in nature and we would caution against raising rates too aggressively. The Bank of England has a difficult balancing act ahead of them and we hope that inflation can be tamed without harming the economy too significantly.”

More in this category: « FCA expects only 8% of staff to strike FOS pushes back complaints to firms »
back to top