Register for Financial Planning Today website for FREE to view more stories and get our daily newsletters. Click on 2 stories to see Registration pop up.
Thursday, 29 July 2021 08:18

Lloyds to acquire Embark for £390m 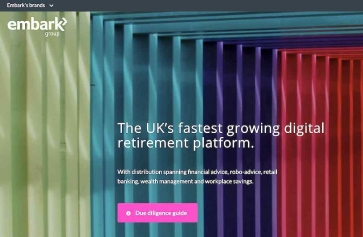 The sale excludes the Rowanmoor SIPP and SSAS administration business, which is being retained by existing shareholders.

Lloyds Banking Group, which owns Scottish Widows and has a half share of Schroders Personal Wealth, will acquire the whole share capital of Embark. However, the sale excludes the Rowanmoor SIPP and SSAS administration business, which is being retained by existing shareholders.

Embark Group specialises mainly in retirement solutions and operates a range of brands including Embark, Rowanmoor, Vested and The Adviser Centre. It has its own investment platform and also provides SIPP, SSAS, Multi-Asset Funds, fund research and employee benefits consulting. It has £40.8bn in assets under administration on behalf of about 425,000 consumer clients.

The deal is a major one for Lloyds Banking Group and will strengthen its distribution. The bank said with the latest deal it aims to meet more of its customers’ broader financial needs, whilst retaining more of the c.£10bn assets under administration which customers invest with third parties through the bank each year.

The sale will see Lloyds Banking group acquire c£35bn of assets under administration on behalf of c410,000 consumer clients within Embark Group Limited.

A consideration of c.£390m will be paid for the entire share capital of Embark upon completion. The transaction is expected to have a c.30 basis points impact on Group CET1 capital and deliver a mid-teens return on invested capital in the medium term, both including all integration and restructuring costs.

David Barral, chair of Embark Group, said: “The combination of Lloyd’s Banking Group’s financial strength and distribution reach, combined with the agility, digital capability, and expertise of Embark, will provide the perfect opportunity to create a market leading proposition for consumers, intermediaries, and strategic partners.

“Rowanmoor, as a leading specialist SIPP, Group Pension Trust, and SSAS administration provider, will become an independent standalone business.  It will have the ongoing support of existing shareholders who remain committed to the business, and will continue to work closely with partners and financial advisers to deliver excellent service and good outcomes for their customers.”

Antonio Lorenzo, chief executive of Scottish Widows and group director, insurance & wealth at Lloyds Banking Group, said: “There’s an ever-growing customer demand for clear, simple and affordable Financial Planning and retirement products and services. Our acquisition of Embark will not only help us serve all of a customer’s financial needs in one place, but also sit alongside our existing partnerships which meet the more complex Financial Planning and investment requirements of mass-affluent and high net-worth customers through Schroders Personal Wealth and Cazenove.

“Through Embark’s technology, we will be able to increase the reach of our investment offerings for customers who are happy to manage their own portfolios, through modern, easy to use technology. We’ll also be able to enhance our intermediary proposition, strengthen our offering in Retirement and modernise the way Scottish Widows works with advisers, recognising the continued value of advice.”

The takeover of Embark is also likely provide a return for a number of asset managers which hold stakes in the business, including BlackRock and Franklin Templeton who are the largest shareholder in Embark with 26% of the equity.

Embark was established in 2013 by Phil Smith, who remains its chief executive and is a major shareholder. In April Embark Group announced it had appointed LV= Financial Services senior independent director and risk chair David Barral as its new chairman, replacing David Etherington, who held the position for three years.

Embark has grown rapidly in recent years through a combination of takeovers and organic growth. Its acquisitions included the advised and partnership books of Alliance Trust Savings, Zurich’s retail wealth platform and its five risk-rated Horizon multi-asset funds.

Speculation about the acquisition first started in May when rumours began to emerge about talks between the two firms.

More in this category: « FCA launches diversity consultation SPW sees 133% increase in referrals »
back to top