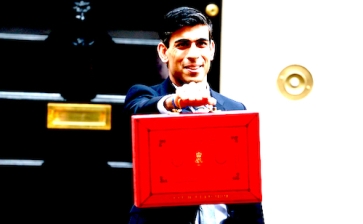 In his Autumn Budget today Chancellor Rishi Sunak warned MPs that inflation would likely average 4% over the next year.

Quoting forecasts from the Office for Budget Responsibility, he said inflation, currently 3.1%, was likely to be around 4% for the next 12 months, well above trend and the Bank of England's 3% cap.

Labour has warned that CPI could top 5% in the next few months.

The Chancellor said rising inflation was a global issue as the world economy recovered from Covid-19.

Mr Sunak said that while inflation was set to be substantially above the trend of recent years, the UK economy was set to recover to pre-Covid levels by 2022.

He said OBR forecasts suggested annual GDP growth of 6.5% this year, followed by 6% in 2022 although falling to just over 2% the following year.

Unemployment has performed much better than expected, he said, and is due to peak at 5.2% next year, lower than the 11.9% once predicted.

In an hour-long Budget, the Chancellor said that government borrowing has been lower than expected and foreign aid spending would return to 0.7% of GDP by 2024/25.

The Chancellor left most personal tax and savings rates alone but did announce that the Universal Credit taper rate will be cut by 8% no later than 1 December to 55%, a move designed to make it more worthwhile to work for those on Universal Credit.

The Chancellor spent some time reforming rates of alcohol duty and aided some parts of the drinks industry.

He said planned rise in the duty on spirits, wine, cider and beer will be dropped and the number of alcohol duties will be cut from 15 to six. Rates on many lower alcohol drinks including rosé wine, fruit ciders, liqueurs, lower strength beers and wines, will be cut. Sparkling wines will have the same duty as still wines of equivalent strength however stronger red wines, fortified wines, and high-strength ciders will see a small increase in their rates. There will be a 5% cut in duty on draught beer and cider to help pubs.

Fuel duty has been frozen.