Register for Financial Planning Today website for FREE to view more stories and get our daily newsletters. Click on 2 stories to see Registration pop up.
Friday, 27 September 2013 13:18 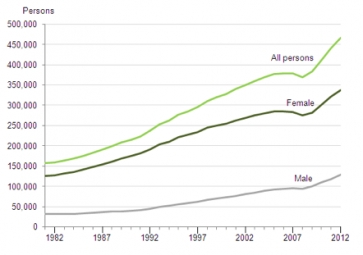 Population aged 90 and over, 1981-2012, England and Wales
There has been a rapid rise in the number of very old people in England and Wales over the past 10 years, according to the Office for National Statistics.

In 2012 there were estimated to be 465,500 people aged 90 and over living in England and Wales, just under 1% of the total population. Between 2002 and 2012 there was a 33 per cent increase in the number of those aged 90 and over.
In 2012 in England and Wales, the number of centenarians (those aged 100 and over) was estimated to be 12,320.
Older women outnumber men by a considerable margin. There were estimated to be 2.6 women per man aged 90 and over and 5.9 women per man aged 100 and over in England and Wales in 2012.
The details are released today in the 2002-2012 Estimates of the Very Old (including Centenarians) for England and Wales published by ONS. The estimates provide annual mid year estimates by sex and single year of age for persons aged 90 to 104 and for the 105 and over age-group for England and Wales as a whole.
The 2012 estimates are published for the first time today, while estimates for 2002 to 2011 are revised. Corresponding 90 and over estimates for Northern Ireland for 2002-2012 are also published today by the Northern Ireland Statistics and Research Agency (NISRA).
{desktop}{/desktop}{mobile}{/mobile}
This release does not include 2002-2012 Estimates of the Very Old for the United Kingdom. These estimates will be published in early 2014 following the publication of the revised 2002-2010 Mid Year Estimate (MYE) back series for Scotland in October/November 2013.
ONS publishes MYEs of the population for England and Wales and for the UK by single year of age up to age 89 and for the 90 and over age group. To provide users with a consistent set of age estimates by single year of age up to age 105 and over, the Estimates of the Very Old (including Centenarians) series is constrained to the 90 and over totals in the MYE.
Tweet
This page is available to subscribers. Click here to sign in or get access.
Published in Articles
Tagged under